A Sad Reminder about the Kurdish Question

As someone who has lived with the Palestinian-Israeli conflict for over the last two decades of my life, I was sad and frustrated when hearing about the 13 soldiers killed in eastern Turkey yesterday. Like a ritual I am too far familiar with, I waited until the morning to read the names of the fallen soldiers, to hear their stories, to find out who they were; to find out who the people in the uniforms really were. I also read alternative news sources to learn about the other side, the Kurdish fighters killed; understanding that both the soldiers and the ones fighting are both Turkish citizens; both caught up in a struggle which has gone on far too long. While there are counter narratives at what happened, I do not find comfort in any of the sources. Last night, the dreams of young people were snatched away by gunfire and explosion, leaving their families to mourn for days, months, years, and lifetimes.

The clashes come at a time of great uncertainty in Turkey. Following the elections, some of the independent candidates affiliated with the mostly Kurdish Peace and Democratic Party (BDP), have been blocked from entering the parliament due to the fact that they are awaiting trial for crimes related to belonging to an affiliate group of the outlawed PKK Kurdish Workers Party. Topping the list is Hatip Dicle, plus six others out of the total of 36 independent candidates, who are barred from entering the parliament. It is important to point out also that in the case of Hatip Dicle, the Supreme Election Council (YSK) approved his candidacy previous to the election and only after his victory did they announce that they would not accept his candidacy handing the parliamentary seat over the to the ruling AK party candidate. Until now, no compromise has been reached and the 36 elected members of parliament have made it clear that they will not enter parliament until every last one of their members are allowed to enter parliament.

If this was not enough, the Democratic Society Congress (DTK), an umbrella group for Kurdish groups has declared they are aiming for democratic autonomy, something that stands in complete contradiction to the Turkish state, with even the ruling AK party, once sympathetic to Kurdish aspirations, not even coming close to accepting. The congress’s findings were announced by Aysel Tugluk a BDP elected MP, who stated that the “Kurdish people do not want to be a non-status population anymore. There is no other population in the world like Kurds, which include 40 million people and do not have rights. We, as Kurdish people, are declaring our democratic sovereignty, holding to Turkey’s national unity on the basis of an understanding of a common motherland, territorial unity and the perspective of a democratic nation.”

While it was clear that the Kurdish demands have risen, something to be expected after securing such an important block in the parliament, it is incumbent upon them to ensure that the Kurdish struggle remains within the realm of civil action and that they work hard to secure a new ceasefire between the Turkish state and the PKK. Even if the BDP supports passive resistance and knows that the Kurdish citizens of Turkey have gained more through civil struggle than military, on this day it needs to reiterated. Likewise, the AK party and the opposition People's Republican Party (CHP) need to quickly find a solution to the parliamentary crisis and to ensure that work on a new constitution can begin which will offer the Kurdish society rights which they have been demanding for decades. The alternative is more bloodshed and violence; something that if it is not dealt with effectively will certainly only get worse.

For articles on this topic see:

A March for Palestine and the Deterioration of Israeli Democracy 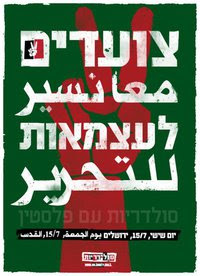 This upcoming Friday, July 15, the weekly Sheikh Jarrah solidarity protest group is planning a massive protest to support the establishment (and UN recognition) of a Palestinian state this upcoming September. With the Israeli right-wing government once again attempting to legalize anti-democratic laws, this protest cannot come at a better time.

The planned protest follows similar protests of Israelis saying “Enough to the 44 years of Occupation!” In June, the Jewish-Arab left party, Hadash, along with Meretz, Peace Now, and other affiliated groups organized a massive rally in Tel Aviv supporting a free Palestine. Currently, Hadash is also in the midst of a signature campaign and providing information about the upcoming UN vote, which will recognize the right of the Palestinian people to a homeland, aside Israel, with Jerusalem serving as a joint capital for the two peoples.

Friday’s Sheikh Jarrah Solidarity march organizers (see my past blog on the SJS group), have declared the following:

This Friday, July 15th, we will stand with our Palestinian partners in a Palestinian-Israeli march through the heart of Jerusalem for the independence of Palestine -because the Palestinians also deserve to be “a people, free in their country”. Because Jerusalem is the place for this freedom to be realized and because Jewish-Arab solidarity is the only response to hatred and racism. We will march together in both sections of the city, the Israeli and the Palestinian, to express our support of Palestine’s independence and our commitment to fight for it together.

Writing in an article in Haaretz, Yael Sternhell likened the upcoming march and Israeli solidarity with the Palestinian cause similar to the participation of whites who joined in with the African American civil rights protest in the 1960’s and concluded by saying that:

The march supporting the Palestinian declaration of independence is a golden opportunity for change. It's the moment we can say to ourselves, to our Palestinian neighbors and the entire world that we too can be freed from the chains of hatred, fear and the racism that grips the State of Israel.

With her earlier acknowledging that:

In the Israel of 2011, every manifestation of basic human empathy toward the Palestinian side, every disclosure of understanding for its aspirations and priorities hits a wall of hatred, distrust and the growing siege mentality.

While certainly there are huge differences between the history of the Palestinian-Israeli conflict and the struggle for equal rights in the US, it is hard to argue with Sternhell, especially in light of the continued attempt at legislating anti-democratic laws in Israel. Today in the Knesset the anti-boycott law is being currently ironed out which applies “severe punishments on anyone who calls, directly or indirectly, for boycotting Israel.” While Haaretz is known for its left leaning editorials, today’s editorial is particularly scathing, highlighting the danger of this law:

This is a politically opportunistic and anti-democratic act, the latest in a series of outrageously discriminatory and exclusionary laws enacted over the past year, and it accelerates the process of transforming Israel's legal code into a disturbingly dictatorial document. It casts the threatening shadow of criminal offense over every boycott, petition or even newspaper op-ed. Very soon, all political debate will be silenced.

Certainly, with such laws being enacted, Israeli settlers are receiving blatant support by the Israeli government to continue their colonization project. The struggle for Palestinian independence should top the agenda of every freedom loving and democracy supporting Israeli, who are subjected on a daily basis to the systematic and compulsory collaboration with an oppressive state who has denied the Palestinians their basic rights for the last four decades. Perhaps, with such grass roots movements, and the restructuring of the Israeli left into a democratic front, more and more Israelis will also join in on the struggle for Palestine since it seems that most Israelis have come to the conclusion that the future of Israel as a Jewish state is contingent upon leaving the occupied territories; sadly, however, the current Israeli government refuses to listen to the silent majority remaining merely as a mouthpiece for right wing factions. While I will not be participating on Friday’s march, they certainly have my support coming from my current residency in Istanbul.

Turkey and Israel: Bridging the Gaps and Moving Forward?

During the last few days, both Turkish and Israeli newspapers have been filled with headlines hinting that the two countries are serious about reconciling their differences. Something I obviously find refreshing and spelled out the need for in an article in Haaretz. The first major test standing between the two once friendly states is reaching an agreement over the wording of a soon to released United Nations Report on last year’s Gaza Flotilla incident. We will need to wait and see how both countries will climb down from the tree and find a compromise which allows Israel to “apologize” without “outright apologizing,” not to mention finding a meeting point over Turkey’s demand that Israel can compensate the victims’ families of the flotilla incident. Of course, Israel’s negotiating chip in all of this is the fact that there are rumors that Turkey also runs the risk of being chastised in the report, something that Turkey would not at all be pleased with since it was Turkey that demanded that the UN investigate the incident (see Hurriyet Daily News article which does a good job at explaining this issue)

Nevertheless, there is no doubt that the ball is mainly in Israel’s court with Turkey successfully foiling any Turkish participation in the current Aid to Gaza Flotilla, which has ran into serious problems in Greece. Furthermore, it seems that Israel has also turned to Turkey to help reignite Israeli-Hamas negotiations over the release of the Israeli held captive Gilad Shalit in exchange of Palestinian prisoners. Last autumn, I argued in an article in Today’s Zaman that if anyone could bring the release of Shalit, it was Erdogan. I still believe that he is the ideal person to work for the release of Shalit, and if he succeeded he would receive the prestige of Palestinians and Israelis alike.

Clearly, Turkey is in the midst of renegotiating their presence in the Middle East as a result of the Arab Spring revolutions and their major fallout with Syria, whose leader Bashar al-Assad continues to lead a bloody campaign against his people’s uprising, with over 1500 protestors killed. However, it is important to equally state that Israel needs now more than ever to renegotiate their presence in the Middle East. Their warming up to Turkey can greatly be explained as a tactic to somehow defer (or minimize the damage of) a unilateral declaration (and recognition) of a Palestinian state at the United Nations in September, a topic I will focus on in the next few weeks. We should hope that Turkey will be able to convince Israel once and for all need to take Palestinian claims seriously and negotiate with them as an equal partner. Further, Israel would be wise to listen to Turkish criticism since Turkey is not far off from what most of the world believes: Israel needs to recognize an independent Palestinian state based on the 1967 borders. In other words, the occupation of Palestinian lands needs to come to an end and Jerusalem should become the united capital of both Israel and Palestine.