Ever since the Gezi park protests, Turkey has taken numerous blows in its international prestige. This was exacerbated following the unfolding of last December's massive corruption scandal, a story more fitting of a Turkish telenovela, with the script including a pop-star, private jets, cash hidden in shoe boxes, and the rumors of billions of dollars being thrown around like small change.

Few in the world seem as if they bought former Prime Minister and newly elected President, Recep Tayyip Erdogan's claim that these were all orchestrated attempts at overthrowing his government. While in Turkey, Erdogan and his close confidantes have clamped down on the domestic media, he has had to fight attempts by international media outlets to pose tough questions, often leading to him, or his pro-government press, to accuse international journalists of impartiality, or even being agents.

Apparently, however, Erdogan miscalculated the potential backfire his official opening of the presidential palace, coined the "Ak Saray," the White Palace, would cause. The international media seized this story, and rightly so. The $615,000,000 thousand-room palace, which once finished could reach one billion dollars, shows to what extent Erdogan's has fallen out of touch with reality (as if his new jumbo-jet was not proof enough).

If not bad enough, this over-extravagant kitschy building was built on protected forests despite a court-order to halt the construction. Yes, what he did not succeed to do in Gezi Park, he succeeded to do in Ankara's Ataturk forest. Erdogan brushed off the opposition's criticism concerning the palace, simply stating "if you have the power and courage, then come and demolish the building." Further, just yesterday, Erdogan stated also that he was not sure what all the hype was about, explaining that one needs to take into consideration the fact that for the last 12 years as Prime Minister he has had to pay rent.


What is clear is that this has turned into an international public relations fiasco; and, what makes this different than other past scandals is that in this case, he cannot blame this on an internal enemy or protesters in a park. This was his making, and his making alone. It is perhaps for this reason that the numerous international media are openly ridiculing Erdogan and his new palace.

Below is a "top-ten" list I have compiled of international sites, which have subtly, or openly, mocked Erdogan and his new palace; with some going "below the belt," and others opting just to report the facts. It seems safe to say that Turkey's diplomatic corp has their work cut out for them. I myself cannot remember such a low-point of Turkey's portrayal in the international arena.

1. BBC One minute video-new palace facts splashed across the screen; the background music says it all. And, they don't forget his new jet either (watch towards the end).

2. The New York Times was one of the first among the international press to break the story. We all know there has been tension between Turkey's President and the NYT. However, as others did below, the NYT allowed Erdogan's introductory film of the palace to do the talking. In short, it seems they understood that the video, with Turkish anthem redone to a new tune, explains it all:

3. Quickly becoming a major news source for Middle East issues, Al-Monitor's veteran Turkish journalist, Kadri Gursel, gets placed high on the list for bringing the palace to the English reader's attention already in mid-September, in an article entitled: Erdogan's $350M Palace (not a bad estimate even if it was $300M off). In fact, he too thought it was best to let Erdogan explain this new situation:

4. Bloomberg cut right down to the core, featuring Erdogan's photo at the new palace, with its headline and starting the article with short sentences: A palace four-times the size of Versailles. A custom built airbus jet. Dozens of servants. 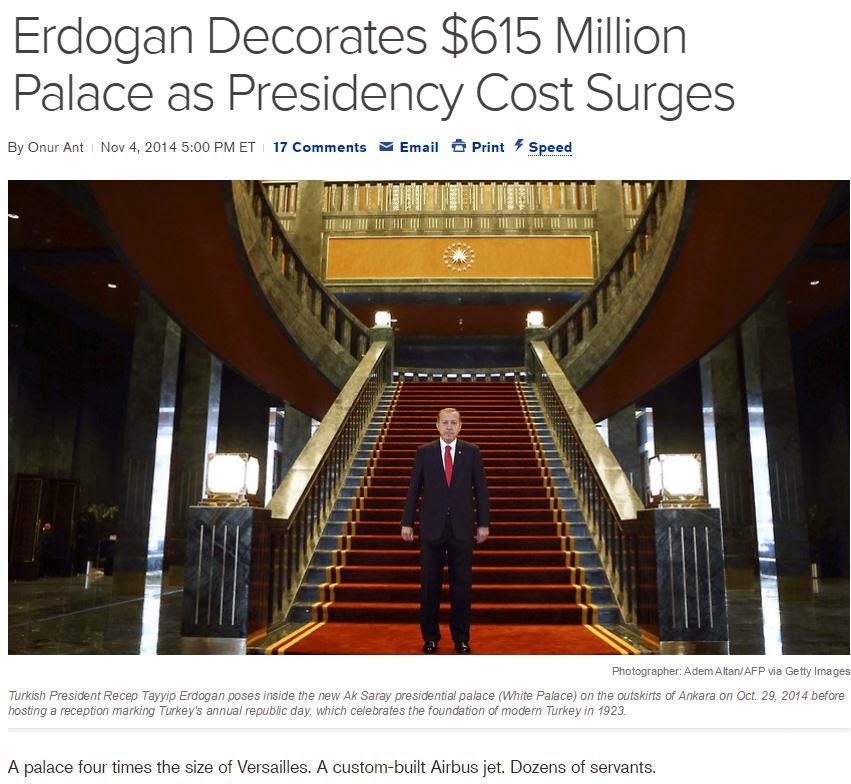 5. Egypt's Al-Ahram Weekly took a direct jab at Erdogan (and thus the saga of strained relations between the two countries continue) accusing him of trying to revive the wealth of the Ottomans, with him as Sultan, just as Turkey was faced with another mining disaster:

6. Al-Arabiyah news took a different route, taking ques from the Turkish opposition who compared Erdogan's new home to that of Ceausescu, but took it two more steps further, comparing it to palaces of a number of historical dictators, such as Saddam Hussein. Pictures were included: 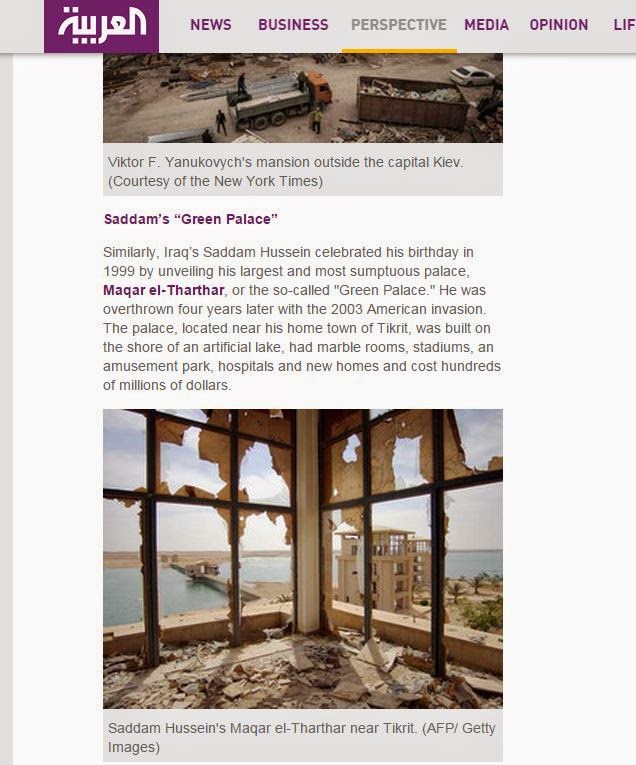 7. USA Today gets sixth place simply due to the fact that it was so desperate for a headline that they had to throw Ebola into the picture. Admittedly, this was a bit far-fetched to say the least!

8. Financial Times opted to headline with another one of Erdogan's odd reasoning behind the palace's construction; solving traffic problems:

9. Huffington Post gets on the top-10 for its inflation of adjectives to describe the "insanely opulent" Turkish palace: 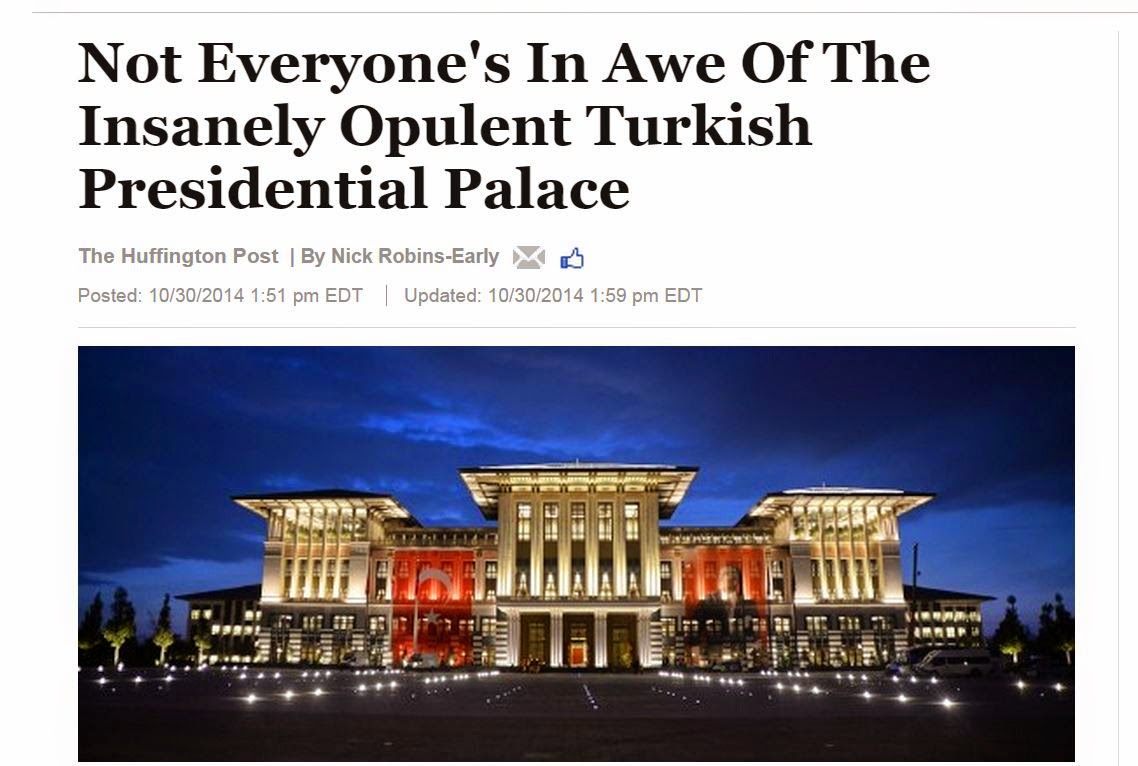 10. And, last but not least, is the Times of Israel's article, which gets the good citizen's awards. Perhaps, in order to not create yet another diplomatic crisis, they stuck to reporting about the palace, leaving out analysis, and presenting both the opposition and government's take on the issue:

Not 24 hours has passed, when John Oliver also took head on Erdogan's Palace. Now this takes the cake! Click on this link to have a watch! (was not able to embed the video). In his words, "this palace is insane!" And laughs that after the 500th room, it must have been difficult what to do with the other 500 rooms." 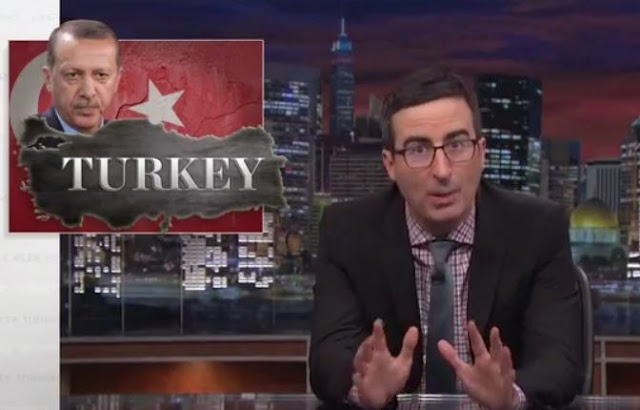