The Real Winner is Hope! A Look at the Turkish Election results

The recent Turkish elections dealt a major blow to the ruling Justice and Development Party (AKP), and a greater blow to the die-hard fans of Turkey’s president, Recep Tayyip Erdogan. It was clear in the run-up to the elections that this was a mandate on whether-or-not Turkey was headed to a super-presidency, or what I called in an earlier article a ‘Putinization’ of the Turkish political system. The Turkish people gave an overwhelming no to the AKP’s plans; the AKP received only 40.8% of the vote, dropping a whopping 9% since the 2011 vote. For the first time since 2002, the AKP can no longer rule as a single party, well under the 276 seats needed. 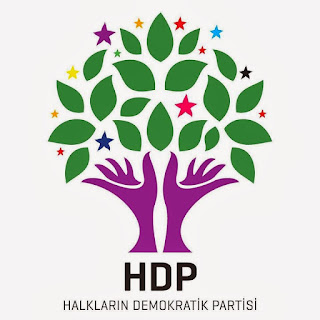 The real source of evening’s exhilaration was that the Peoples’ Democratic Party (HDP) strong showing with an impressive 13% of the overall vote. Their success is attributed to its charismatic leader, Selahattin Demirtas, and its inclusive ticket, which promises social and political justice not just to Kurds, but to all socially oppressed groups, such as women and the LGBT community. They also have created coalitions with socialists and environmentalists. Through dedication and hard work, the HDP managed what had seemed impossible: a mostly Kurdish party shattered the high 10% threshold.

In addition to this, while the Republican People's Party (CHP) remained about the same, at 25% of the vote, it held ground, even with the flow of CHP voters to the HDP, who were determined to block Erdogan’s plans for a super-presidency.  As for the National Movement Party (MHP), it gained votes, up to 16%, stolen from the AKP. In fact, this was exactly what Erdogan had feared, on the campaign trail he often inserted nationalists rhetoric. However, this backfired, with it alienating the AKP’s conservative Kurdish voters, who also ended up not buying into Erdogan’s “Koran-thumping” politics.

So what went wrong for the AKP?

Since the Gezi Park protests, Erdogan has done his utmost to alienate moderate voices in his party. In fact, with the breakout of the December 2013 corruption scandal, Erdogan has increasingly built a wall of political cronies around him, who join with him in creating a chorus of hate and fear. In fact, during the election season, Erdogan overshadowed the main AKP candidate, Prime Minister Davutoglu, regularly rallying, never missing the chance to curse Gulenists, Armenians, Gays, and Jews. This might have worked or been brushed aside when Turkey’s economy was booming, but certainly would not be tolerated in a sluggish one.  Not to mention the fact that many Turkish citizens seem to have become fed up with Erdogan whose politics are the main source of polarization.

Unable to stop Erdogan and his hateful press, Davutoglu figured that he could balance the die-hard Erdoganists by staying close to more moderate and sensible politicians. However, the problem is that Erdogan has become impossible to control; yet, without Erdogan, the moderate voices of the AKP simply do not amount to much in terms of political clout. This is exacerbated by the fact that the public clearly sees the moderates' silence in the wake of corruption, disregard for law, and Erdogan’s extravagance.

Thus this election has shown that not only Turkey is at a crossroads, but also AKP’s moderate voices. While it is hard to imagine they will fight for the full control of the party, if they don’t show the public that they are serious about abandoning Erdogan’s plans for a super-presidency, it seems the party could be doomed to a bleaker future. In short, it seems hard to imagine that the CHP, MHP, or the HDP, will allow Erdogan to move forward, blocking the AKP’s chances of entering a coalition government.

Of course, it is still early to tell. Already CHP leader Kilicdaroglu has made public his thoughts of the possibility of a CHP-MHP-HDP coalition. While it seems like a long shot, Turkey has seen equally strange coalitions in the past. In his article on the election, political analyst Serkan Demirtas states that this could happen based on "certain conditions and with the purpose of undermining Erdoğan’s position. This large coalition would later take the country to polls with, for example, a reduced election threshold and other legal amendments for the further normalization of the country.”

In my opinion, we will need at least a week or two to pass until we can speak wisely on what possibilities could emerge. If I could weigh in with my life experience, I am never surprised at politicians taking extreme turns with a whiff of power. We will need to play this one out. However, it seems safe to say that new elections, which could happen in 90 days would be a worst-case scenario for the AKP. There is no reason to imagine that in a second round that it could fare better, and another election could lead to deeper divides in the party.

For now, I will congratulate the HDP and convey my wishes that this will lead Turkey to a brighter future, one where the wounds of the past can begin to be heal. It will not be easy, and it would be foolish to think that Erdogan will take this election’s message to heart and begin relinquishing his attempts to receive extended presidential powers.

Nevertheless, as I watched the election results with a group of Turkish university professors and students, I could not help notice the relief on the numerous political analysts’ faces streaming live on Turkish television. A glimmer of hope emerged perhaps for the first time since the Gezi Park protests; indeed, the election results should be treated simply as a glimpse of what better days might lie ahead, providing some hope for a better future.

Sadly, this all came at a heavy price. Just two days before the election, a bomb went off at an HDP rally, killing two and injuring many more. Today, as I write this, I have learned that that a third person died of his wounds. This just shows us that in no way are things as simple as they might seem now.